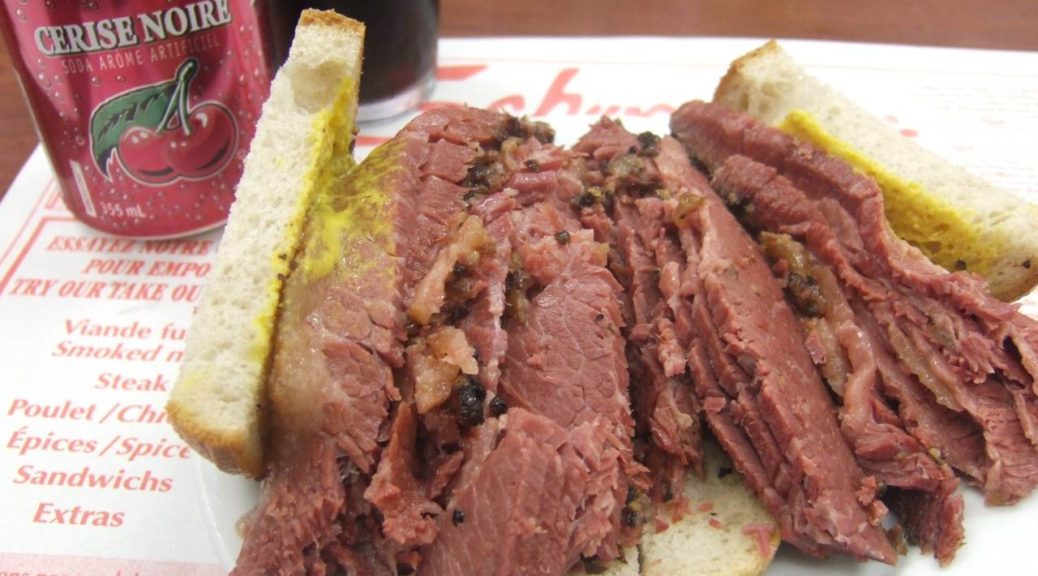 Is this one of the best foods in the world, or what!
Schwartz’s Jewish Deli on Boul St-Laurent and its smoked meat!

As I write this paragraph sitting in Boston, I am reminded of the taste of those excellent smoked meat sandwiches — tender, succulent meat that falls apart easily with the touch of a fork, the exquisite mild pepper spices… accompanied by a black cherry soda or hot tea, it is truly an unique experience! Take a seat at the bar-stool at the deli counter, and enjoy the food amidst the hustle and bustle. The interior of Schwartz’s is kind-of run-down, but that, with the extremely busy waiters, and the tables where you will find yourself doubled up with strangers because space is so tight, is what creates the unique atmosphere of enjoying smoked meat at Schwartz’s.

The protocol: order a medium (sandwich is understood), black cherry, pickle, and french fries. My exact order is a medium, hot water + tea bag, and a pickle (no fries).

The medium is a medium-fat sandwich. Lean is available, but what is the point? Fatty is available, but if you eat here 3-4 times a week, that would be foolhardy. They also have plates, with bread served on the side, but the sandwich is better with the meat warming up the bread, which tastes nicer.
Most people drink the Black Cherry Soda with it. But black tea without sugar or milk is definitely healthier (not that anyone comes here to eat healthy food!).
And easier to ask for hot-water and a tea-bag, since asking for just tea seems to cause the staff to be somewhat surprised.

Some guidebooks will mention that the waitstaff is curt, even rude. Not true in general, but there are some who do fit this description. One guy in particular, has been working here for decades, always refuses to serve hot, black tea, his response is – what is this, a hospital? ☺ Black hot tea actually goes very well with smoked meat, especially on cold winter nights. I continue to ask the guy for hot tea, and for years now, he has always refused to serve this item that is on their menu! [2008: I believe his name was Peter, and seems like he is now retired.]

In the sandwich picture, the slices that look whole will taste very tender, given the fat with it.
The broken-down crumbs are the lean variety, and there is an abundant amount of black pepper spices seen on the meat. So each bite can be medium, lean, spicy, just as you like it. And wash it down with the Black Cherry Soda, or black tea works well too.

It is this combination of hand-sliced meat, meat that fall apart easily, and the small slivers of lean meat, and the special spices that make the Schwartz’s experience so different from other smoked meat places which seem to have a more orderly, sameness in consistency all across, and spices not as good – Schwartz’s beats them all in taste and experience. The color is the first indicator – smoked meat that is pink or light red – and not dark red – never tastes as good as the dark red smoked meat.

Those with a larger appetite can order the small plate, which is equal to 2-3 sandwiches. There is also a large plate, but that is probably best when shared with multiple diners.

There is a marked difference between the smoked meat at Schwartz’s and other places in Montreal. Ben’s is the other place that is mentioned a lot, but it closed down in 2007. Lester’s at 1057 Bernard West, Snowdon at 5265 Decarie, The Main at 3864 St-Laurent, Reuben’s at 1116 Ste-Catherine, and Dunn’s at 1249 Metcalfe are other contenders. They have good smoked meat, but Schwartz’s is just much tastier. The difference is that Schwartz’s is spicier, and it has more interesting taste and texture. The marbling, the fat, is visible in Schwartz’s sandwiches, and they are a dark red color. Other places have meat that is more of a pink color, and the consistency of meat is too uniform. Of course, some people may like it, but if you like spicy meat, and looking for fantastic texture in the meat, stick to Schwartz’s. In a pinch, if cannot get to Schwartz’s, I will go to Dunn’s which has a very convenient downtown location just off Ste-Catherine, and their smoked meat is pretty decent, nice red color but it has a very uniform texture, lacking the character of the Schwartz’s variety, but sometimes and for some people certainly, that may be a good thing.

[2004-2008] I used to pack up a pound of the smoked meat for taking back to Boston, but since 2004 US customs no longer allows even cooked meat to be transported back into the USofA, sad state of affairs we find ourselves in.
[2009] Meat import selectively lifted. Visit the US Customs Know Before You Go page for current information. Note: the customs officers at the roadway entry areas and the US pre-clearance at Montreal airport may apply different rules than the customs officers in US proper. So be warned that this whole thing is quite a mess…
As for Cott’s Black Cherry Soda (probably an off-brand, generic brand soda), I initially could not find it in any grocery store in Montreal, it but finally discovered that most Dollarama stores sell Cott’s Black Cherry Soda – 3 cans for $1 in 2004. [Same price in 2009 too!] [2013]: So many years have gone by, but still a thrill to visit Montreal and eat this sandwich.
[2016]: Dollarama is no longer offering Cott’s. Dollarama seems to be moving upscale with $2 and $4 items now, so maybe they decided they could not use up space with 3 for $1 items. ☹