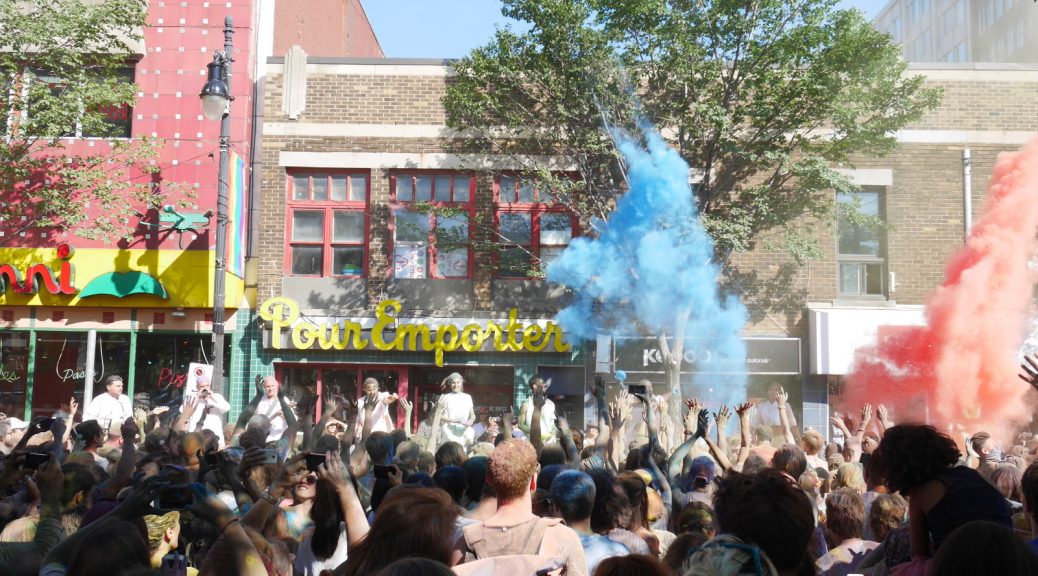 The Color of Time by Artonik, a holi inspired performance and parade, on Ste-Catherine near Berri-UQAM metro.
By Artonik (group from France), performing in Montreal as part of the à nous la rue and vive 375 (the street is ours and alive 375) celebrations.

2017 July 22 & 23, 4 PM
Parade started on Ste-Catherine St at Beaudry Metro, then paused on St-Timothe intersection for a performance, and then moved on to the main show on Saint-Catherine Street between Berri & Saint-Hubert.

Inspired by the Hindu celebration of Holi, it is a parade with music and dance for around 40 minutes, and then 20 minutes of intense blowout fun when the performers and the audience indulge in a shower of colorful powders!

4PM at Beaudry Metro, was hot! And crowded, so could not really see anything. But, just enjoy the music and walk along with the performers. They hung out around Rue Saint-Timothée for around 20 minutes of dancing and drawing with colors on the street.

Then around 4:40PM they reached the raised stage on Saint-Catherine Street between Berri & Saint-Hubert, across from Place Émilie-Gamelin. This is where the fun ramped up! Could see the performance, and hear the music too. And the colors really filled the air.
Event volunteers were handing out plastic sachets of colored powder to the spectators, and with so many kids and fun-loving adults, the air was filled with the colors.

Color of time pictures – July 22, 2017 on Ste Catherine, between Beaudry and Berri-UQAM.
Color of time – Videos: the finale, with colors filling the air
At the middle of the parade, dance performance while coloring the street.

The colors were all powder only, which was great, all of it will easily wash off. The street painting was done with edible colors, at least dogs eating it suggested that was so.