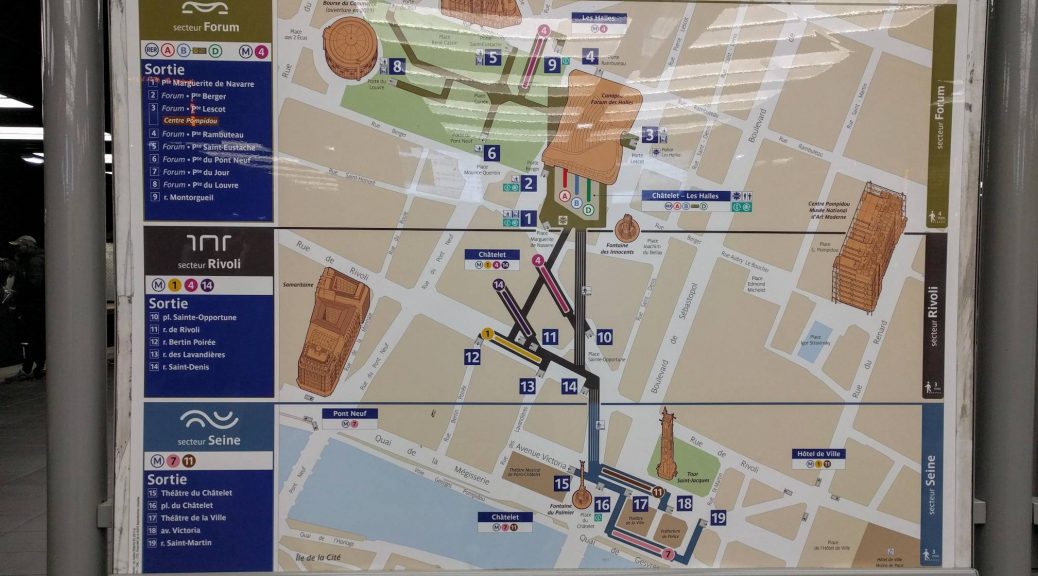 Wanted to explore a place or two near RER B train station, someplace with a quick return to CDG airport.
Planned ahead and had only a very small light carry-on.

Easy to see signs for RER B after baggage exit at CDG airport. Also says Paris by Train.
40 minutes to Les Halles-Chatelet, good place to explore.
Was there by 1030am. Then took metro yellow line 1, after a long corridor walk, requires exit and reentry. Ticket 1-5 zone tickete mobilis day pass until midnight best option. Went to Champs-Elysees. Nothing but big palaces and museums there. No street shops or food, so not something on top of my list.
Better to hang out around Chatelet metro. Can keep circling many small and major streets there. Easy to spend 1-3+ hours. Many eateries, big and small. And many shops. Also fantastic architecture – houses as well as big buildings and churches and small parks. And of course, the river Seine, great views from bridges.
If you like busy city streets and cityscapes, hanging around this area will be better than the main tourist spots such as Champs-Elysees or Eiffel tower.
I was first going to a large market, but the keys ones I looked at were closed when I was visiting.

Monday afternoon security was fast. Does take 30 minutes to get from RER B station to other terminals such as L, which requires taking the automated train. Look carefully before entering security that it is correct gate: K L M in terminal 2E.
Study metro map well. While Chatelet area has many metro entrances – underground entrances from street level labeled Metro or Metropolitan – they may be other metro stations such as Hotel de ville. Fine to enter there, just take train line 1 to Chatelet for RER B.
I had a small hiccup using zone 1-5 tickete mobilis. It was read correctly at CDG airport, but would not let me exit at Chatelet Les Halles! Titre illisible. I thought it meant invalid ticket and needed more zones, but no. Google translate, using pre downloaded French, said it meant unreadable title. Luckily, found a manned services booth at that large station, even with no French, I was able to explain the issue and they gave me replacement ticket. That worked fine for rest of day, multiple trips. Mobilis day pass for zones 1-5 valid until midnight cost €17.80. Chip-enabled credit card from USA was accepted at vending machines.

I was in town from 10:30am to 12:15pm. Back to CDG station by 1:05pm.
Reached gate by 1:45pm, so was pretty fast through immigration and security Monday afternoon, no lines, but heard this can be much slower at CDG, so should give it 30+ minutes more.