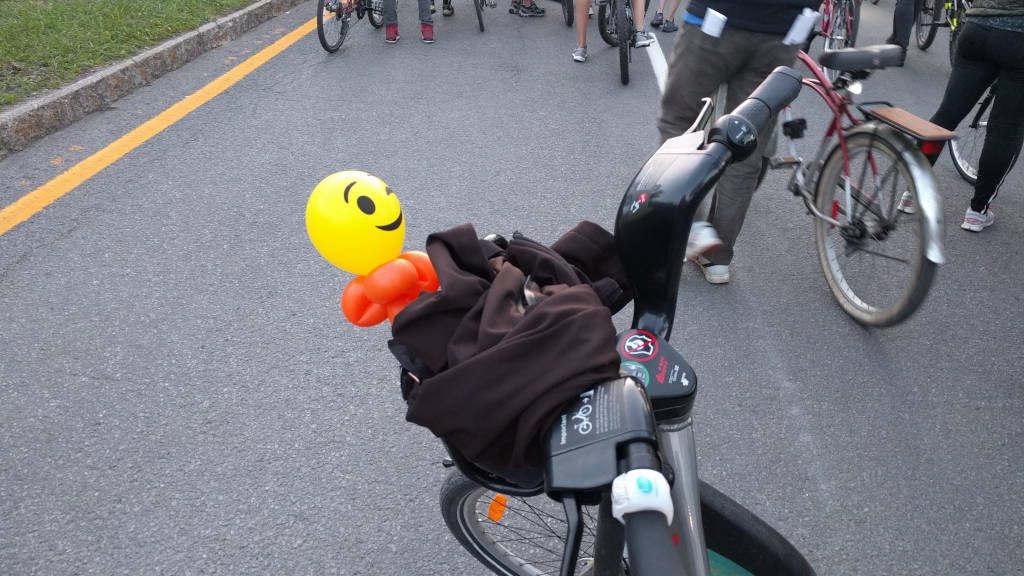 Tour la Nuit is the Montreal Night Bike Ride event.
It is part of the Go Bike Montréal Festival (GVO – Go Velo MTL) which ran from May 26-June 2 (2019).
Friday May 31 2019 was the Tour La Nuit biking event, a 21 km course in downtown Montreal, on regular streets which were closed to all car traffic.

It was a wonderful experience, though marred by incomplete information about the event (Velo Quebec #fail) and Bixi bike-rental app and organization foul ups.

On the plus side: when one finally gets on the bike and rides on the street, the crisp cool breeze, the wide open streets and night lights makes for an unforgettable experience. Luckily, too, there was no rain during this event while it rained on the Sunday’s full day Montreal Bike Ride event!
Along many inside neighborhood streets, such as Rue Dandurand, many sidewalk corners were filled with adults and kids cheering on the thousands of passing cyclists. The whole city likes to join in and party!

As with all public Montreal events, the facilities and services were outstanding. Plenty of port-a-potties restrooms at the start, many volunteers along the way guiding the cyclists, and big blow out at the end with DJ, music, food, drink, even a ferris wheel on the park. And free chocolate milk at end of the ride! All very nice.

Registration is required and is $35 for adults.
Many kids also participate in the event, so it is a whole family event.
Riders deck out their bikes with lights and such.

Things to know: It would have good to know about the actual event. Velo Quebec organized the event but their web site was missing key information which would have made the event far more enjoyable!
First of all, they say the gates will open at 20:15 hours and last riders can leave at 21:15. And they said the ride takes about 90 minutes at average speed.
But – it is a mess at the starting line! There are thousands of cyclists, and only 5-7 cyclists go out at one time. So it took over 40 minutes of inching along Ave Parc even before we could get on our bikes to ride on. It is all festive and such, but knowing this would make the delay much more understanda
In addition to 40 minutes delay at the start, add another 30-40 minutes along the course when people had to dismount and walk their bikes due to congestion or steep inclines.
Add even more time to slow down and enjoy the Montreal night sights along the way, especially special events like biking inside the Olympic Stadium, and it takes a good 2.5 to 3 hours to complete the course, far more than the 75 minutes I thought it would take based on the FAQ at the Velo Quebec site.

Far worse mess for me was the Bixi #fail. I decided to rent a Bixi, to support more of Montreal business, but their app and organization was a major letdown. The app refused to accept the promo code for the event. I tried many things (restart app, phone) and Velo Quebec booth guys also checked the code and confirmed it was right, Bixi app continually popped up “Invalid Code” message and their customer support was totally useless. I needed a bike, so I then bought a day pass on the Bixi app. I was hoping to dock the bike and re-rent every 30-45 minutes to minimize total cost. I did make around 3 stops, but would have made 4 or 5 optimally. Bixi charges $3 for every 15 minutes over, so the charges crept up fast when every Bixi dock along the second half of the ride was full (even though the app said 1 dock free or such).
So that is the second thing to note: if using Bixi, expect things to mess up. Ride is still enjoyable 🙂
And after the ride, I contacted Bixi e-mail support detailing all the problems and they were much more helpful than their phone support. They refunded all the excess charges, so in the end, Bixi is not too bad.