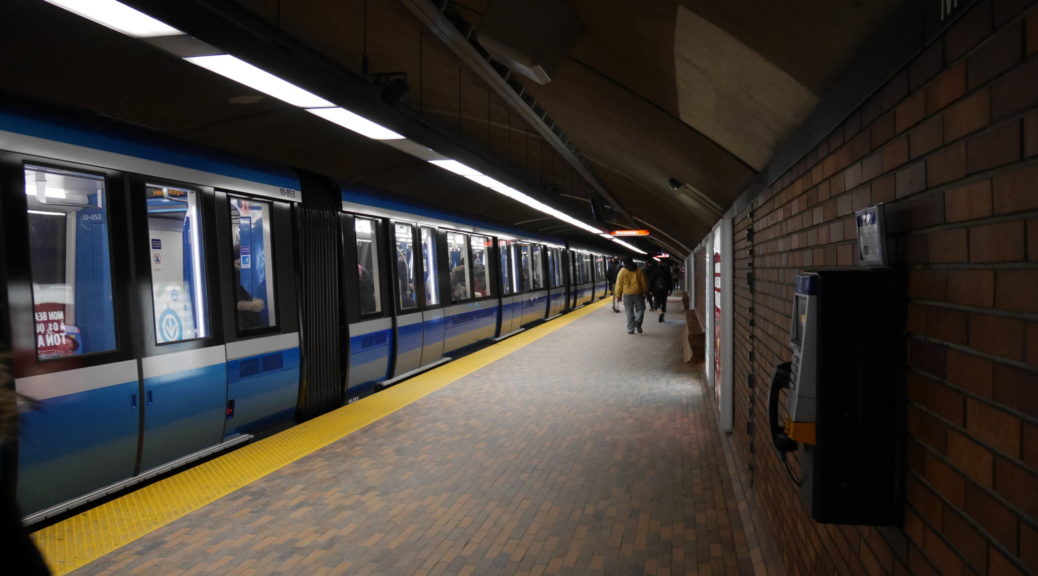 Montreal has an excellent métro (subway) and bus system. Visit the STM site – Tariffs for details on tickets.
2016: Credit cards from the US now seem to be accepted at the Metro ATM vending machines.
Before this the Metro would only accept Canadian credit cards.

For three consecutive days, the 3-day pass is good deal. For tourists visiting for a week and starting on Monday, the CAM hebdo – a weekly commuter pass is a good deal. Other useful passes including a evening pass starting at 6PM and a Fri-Sun weekend pass.

On the tickets subway to bus transfer or vice-versa is free to continue a journey, remember to hold on to your ticket for the entire ride. More details on the Metro at the STM Metro and Bus official web site.

2016: Slowly rolling out the new AZUR Metro Cars! They are great! Here’s a video on YouTube with pictures and video of both the old and new metro cars.

Bixi Bicycle is a great option if you have a working smart phone with data plan in Montreal. T-Mobile or Google Project Fi is a good choice for US residents. Bixi is only available in the non-winter seasons, though. The reason you need a smartphone is to get a quick map of all the Bixi stations around your location when you need to return a bike.
Be sure to read the How it works section on the Bixi page carefully, especially the part about how to return the bike. The bike has to be firmly inserted into the dock, and it may fail sometimes and the led light turns red. Do not leave – remove the bike and insert it again until the led is green! If this fails, note down the number at the Bixi web site and call, otherwise you will be responsible for a lost bike.
While buying a daily pass each day would be fine the advantage of buying the 3-day pass is that you will be charged the hold on your credit card for the bike deposit only once. The 30 day subscription is a great deal for 6+ days of Bixi use, but it seems tourists may not be able to use it since it comes with a Bixi key but that can only be mailed to a Canadian address. May be worth a call to Bixi to explore alternatives for those vacationing for more than a week in Montreal.
Bixi is great deal now that the daily pass price has been reduced to $5 and there are far more Bixi stations than previously available. Google Maps also now works pretty well and tries to show directions using streets with bike paths, which is very useful in the crazy-car-drivers world of Montreal.
Biking on most of the East-West roads will encounter flat roads, while most of the North-South travel will run into inclined streets, especially around south of Sherbrooke to north of Mont Royal. Ave du Parc is one tough bike ride.

And finally – remember to bring your helmet!

Parking is a major hassle on the streets downtown, and parking lots are very expensive. Moreover, driving downtown is just no fun, especially along Ste-Catherine (always avoid), or the lower part of St-Laurent. Avoid driving as much as possible. For any street parking, be sure to learn enough French – names of the days of a week at least – to navigate the multiple signs that apply to street parking. Paying for parking since 2010 is nice and easy now that they accept credit cards. The street pay parking stations accept US credit cards.

East-West street addresses in Montreal will have an East (Est) or West (Ouest) designation. The street that separates East from West is boulevard St-Laurent, also known as the Main. This is very important because looking for 4400 Jean-Talon without knowing if that means East or West of St-Laurent would mean a lot of time spent in searching to find the right place!